Streets of London 2014 - an observation of current rules and behaviours

Coitus Interrupts or the Puller-Outer
Wants to pull out of a side road into the main road, glances briefly to the right, sees traffic and pulls out anyway.

The Non-Indicator
Does not use indicators perhaps because they require too much physical effort (that finger stretch can be really difficult) or because indicating intentions shows weakness, especially if turning right.

The Knee Jerk
Reacts immediately to the perceived insult of a toot by tooting back, longer, and usually louder.

The Turner Prize
In the wake of universal power-assisted steering, almost everyone who finds themselves facing the wrong way does a three-point turn. In a side road, in a main road, in front of other traffic, in front of schools, not yet on dual-cariageways but that will come soon enough.

Not So Merry-go-Round
It is obviously impossible to apply the same rules of roundabout priority to a mini-roundabout, that must be too complicated.

Swing Wide, Sweet Chariot
Is it really necessary to swing to the right-hand side of the road in order to turn left? In a mini? Didn’t need to when I was driving a Routemaster so even the Chelsea tractors have no excuse.

Right of Centre Status
It is obviously difficult to drive a large car on city streets, who knows where the left hand wing mirror is? Much safer to drive in the middle of the road, even if there are cars coming the other way - they can get out of the way.

The Non-Starter
Leaves a super-safe gap to the car in front so that three cars behind catch the red and have to sit through another cycle of the lights.

FU the Texterestrial
Uses the distraction of the text message just arrived to qualify instantly in most of the above categories (especially as non-starters).

The No-Thank-you
Lifting a hand from the wheel to acknowledge someone giving way is far too much trouble and shows weakness.

The Red Exception
If some extraordinary event such as roadworks, slow-moving traffic, a pedestrian or another car turning right denies you your perceived rightful passage through traffic lights then it is perfectly ok to go through a red light.

But let’s not fall into the four-wheels-bad->two-wheels/legs-good trap. So lest we forget:

The Handicap System
By which everyone on two wheels whether Grand P(r)izza scooter or granny with a shopping basket on a sit-up-and-beg has an in alienable right to be at the front of any queue.

Human Rights Lawyer
The pedestrian who knows the law about priorities on crossings and junctions so is happy to enforce that right by stepping in front of moving traffic, no matter how close, without pausing, or looking anywhere but straight ahead.

And the Monsoon Season (a rain shower) that instantaneously makes all of the above behaviours compulsory for everyone on the streets of London.

When I was learning to drive, my dad said that the definition of good driving ‘is to never force anyone else to brake’. Nowadays constantly testing other road users’ brakes is much more important. I will be interested to see how Google/Mercedes/Audi/Volvo self-driving cars deal with these behaviours, or will they be programmed to behave the same way to avoid being readily identified as robots (and thus, soft targets)?
Posted by simonzebu at 04:27 No comments:

I am getting good feedback from those who are reading George.

I have no word yet from the local book store.

I have sent a synopsis and 30 pages to an agent I met at someone else's book launch, not heard back yet.

I have read up on how to use Twitter. No way am I going to be able to Tweet two or three times a day about stuff that flits through my head.
Posted by simonzebu at 04:22 No comments: 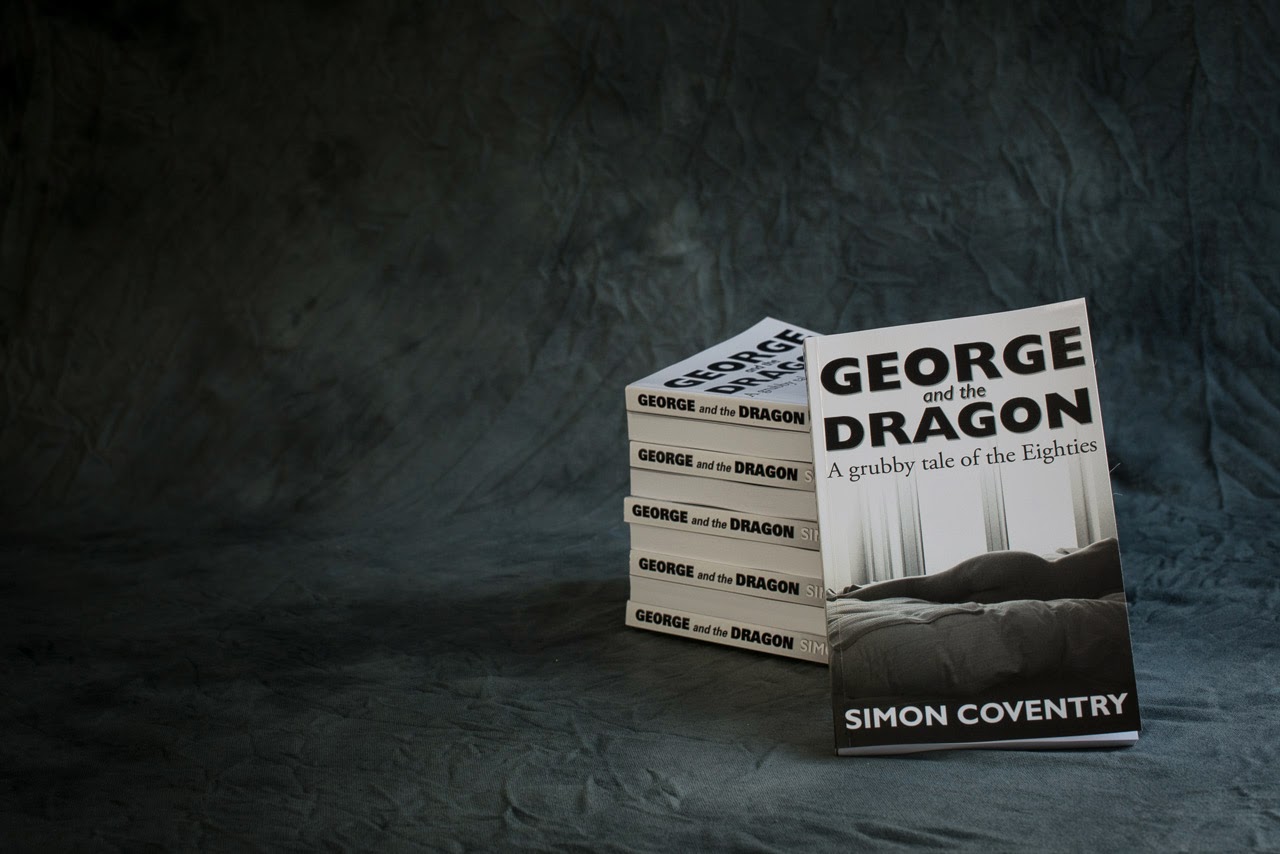 Well, there it is - available on Amazon RRP £5.99 and already they're discounting it.

I have dropped a copy in to local bookshop Queens Park Books in the hope they will let me do a signing or some promotion. I see there are already several local authors featured. That says a lot about Queens Park!

I am stunned at the concept of punters being able to buy a copy which is then printed to order. I want to see that machine in action...

I have a couple of leads to pursue. One, an agent, another someone who knows a successful screenplay writer. Everyone who reads the book says they can see it as a film, I suppose because it is so dialogue heavy.
Posted by simonzebu at 08:43 No comments:

From one review to five! All good. Wow, amazing.

Now sold 17 copies on Kindle. At some point I decided to sign up for KDP Select. Not sure how I'm going to use that, reduced price special offer or free special offer.

Spent a lot of the time this month formatting the book for print-to-order on CreateSpace.

Found the help file for formatting and thought I had followed it. Uploaded the book and ordered a proof then followed a long five days before getting what looked like a real version of MY BOOK.

Unfortunately, on closer inspection, the print was too close to the gutter and the preliminary pages were a mess.

I went back to the help file and realised that you have to format the InDesign document with two different master pages with increased left and right space for right and left pages.

Reading the help files properly, I realised that you can have blank pages. I had mis-understood that. Now with correct gutter spaces and front matter looking more traditional, I ordered a couple more proofs.

When they came they looked fantastic. I promptly put them on sale and sent a support email to ask them to be linked with the Kindle version on Amazon. It only took a day for that to happen and so I sent an email to everyone I know saying that the print version was now available on Amazon at £5.99.

The Kindle sales broke through into double figures. I lent one of my proof copies to an old friend who has no Kindle, ordered another ten copies from CreateSpace, and dropped a copy off to the local book shop to see if they were interested in promoting it.

I found that the print-to-order version on the Amazon site followed Amazon's usual delivery options and did not, after all, have to be delivered from the States. They are going to be printed in Europe so that's a bonus, regular P&P.

So, after being on sale for a few days, I have sold 4 print-to-order copies.

These numbers are so insignificant I cannot imagine why I should be in the least bit excited, but I am.

Posted by simonzebu at 13:29 No comments: